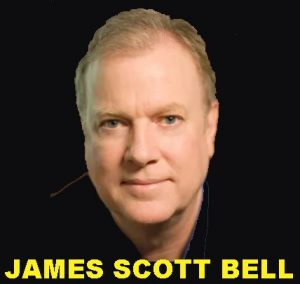 JAMES  SCOTT  BELL  is a winner of the International Thriller Writers Award and the author of many bestselling thrillers. He is a popular writing instructor and conference speaker, and formerly served as the fiction columnist for Writer’s Digest magazine. Jim attended the University of California, Santa Barbara where he studied writing with Raymond Carver, and graduated with honors from the University of Southern California Law School. He lives and writes in L.A. and blogs weekly at Kill Zone — killzoneblog.com/ If you want to stay alive, you better know the rules . . .

“You have any more?”

“Do unto them before they do unto you.”

”And you don’t owe the truth to people who lie.”

“I’ve heard that before.”

Mike Romeo is an ex-cage fighter living off the grid in L.A. Running from a dark guilt that dogs him, he’s finally found a place where he can rest and even heal.

Then a church blows up. And with it all of Romeo’s hopes to be left alone. When he stops to help an injured woman whose kids are missing, someone decides to put a target on his back.

But whoever wants him dead picked the wrong guy. Because Romeo has rules––and he’s going to make them stick. Mike Romeo, the former cage fighter living low in L.A., doesn’t look for trouble. He doesn’t have to. It comes after him. So when he’s hired by a California senatorial campaign to do undercover work, Romeo doesn’t have any illusions. Especially when his duty takes him to San Francisco.

But as Romeo gets closer to solving the mystery of who is behind the hit job on an honorable man, things heat up in the City by the Bay –– and between Mike and a beautiful political operative. Until a bullet nearly takes him out for good.

Now all bets are off. Because if there’s one thing Romeo wants, it’s justice. And he’s going to get it––his way. She was beautiful and naked and dying…

Mike Romeo finds her in the fog, on the beach, staggering around like a drunk. But it’s not alcohol that’s in her — it’s poison.

After getting this mysterious woman to the hospital, Romeo figures that’s the end of the matter.

But it’s only the beginning.

When the woman goes missing, Romeo is hired by her father to find her. But the trail grows cold, the circumstances strange. The people involved with her are a mix of L.A. odd and downright dangerous. There’s a washed-up Hollywood star hoping for a comeback; hired muscle willing to break bones just for the workout; a fight manager with underworld connections; and a strange cult predicting the return of angels to the earth.

And some very bad people who want Romeo dead. “So you’re Mike Romeo. You don’t look so tough.”

All Romeo wanted was to chill by the pool and talk to Zane Donahue, the man who’d summoned him. But trouble walked up to ruin a good day. When Romeo’s around somebody’s always spoiling for a fight.

Dispatching a punk is one thing. Helping an old friend with a murder rap is another. Archie Jennison comes to Romeo when a gruesome and unsolved Hollywood murder is connected to him in a bizarre way. As Romeo begins his investigation, things take on a dark and twisted turn. Hidden secrets cast shadows over Archie’s case, and an open wound from Romeo’s own past threatens to take him down. Suddenly, Romeo is in the fight of his life, and somebody wants to make sure he loses—for good. We were an hour from Las Vegas when the plane began to shake.

Something is rotten in the little town of Dillard, NV. And Mike Romeo is right in the middle of it.

After the plane he’s on has to land in the desert, Romeo tries to check on the woman who was sitting next to him. But the hospital gives him a strange runaround. A local tough tries to lean on him. Then he runs afoul of the sheriff.

Which is the wrong way to turn things on Mike Romeo. Because when he’s pushed, he takes a stand. And that means some very bad people are going to have to take a fall. L.A. is Romeo’s town. Keep off the grass.

When 16-year-old Clint Cunningham is arrested for selling drugs at an elite private school, his mother hires lawyer Ira Rosen and Mike Romeo. It should be a simple case. But nothing is simple in lockdown Los Angeles—especially when people want you dead.

As Romeo digs deeper, the mystery grows darker. Who is pulling Clint Cunningham’s strings? Why won’t he talk? And who wants Romeo eliminated for good?

Layer by layer and corner by corner, Romeo fights his way toward the answers—and a shattering revelation that turns his world upside down. They tried to kill Romeo, but didn’t finish the job. Now his rage is about to rain down…

Mike Romeo is helping a reformed gang member protect a girl rescued from a sex trafficking ring. When the girl is kidnapped, Romeo sets out to find her—and plunges into a heart of darkness unlike anything he’s fought before.

The layers of this evil run deep in L.A., stretching from Skid Row to Malibu, from Little Guatemala to Beverly Hills. When the cops tell Romeo to back off, he only goes further in. Because Romeo has rules, the most important being: Always protect the children.

Now he is a man alone against all the forces of power, money, and influence in the city, forces able to kill anyone who gets in the way.

Until they meet Romeo.

Check out the Kill Zone Blog and join James Scott Bell and a host of distinguished writers as they discuss the craft of thriller and mystery writing!

*  JAMES SCOTT BELL ON THE CRAFT OF WRITING

UP NEXT!  THE DECEMBER 2022 BOTM FEATURE IS:
*  THE JOHN KELLER THRILLER SERIES — By Lawrence Block

ONE YEAR AGO THE NOVEMBER 2021 BOTM WAS: